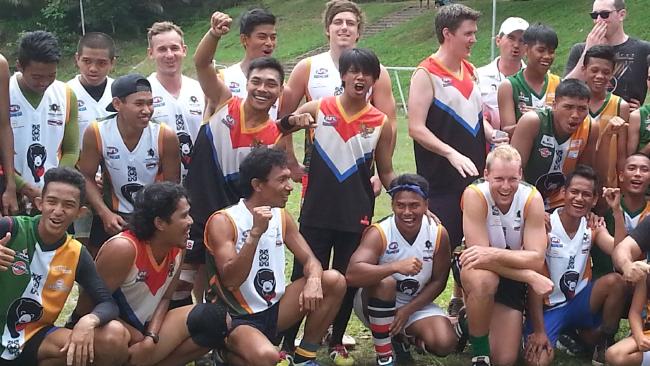 Waratahs football club have recruited two footballers from the Borneo Bears in Balikpapan.

NTFL club Waratahs have placed their footprint in Asia with confirmation this week they are bringing two Borneo recruits to Gardens Oval.

Borneo Bears footballers Timbal and Noor will train with the red and whites in the 2015-16 NTFL pre-season after starring in an international match.

The visit coincided with Anzac Day memorials in the region where one of the final and bloodiest battles of World War 2 were fought.

But for Smart and Weatherald, who umpired the international game, Australian football was the main item on the agenda.

“It all started with (four-time Hawthorn premiership player) Gary Buckenara’s visits to the country and this year was his seventh,’’ Smart said.

“They love their Aussie Rules footy over there, it’s huge, even if it’s played on a soccer field instead of a full sized ground.

“And the administrators want to get better, they want to improve the standard over there and get involved with the AFL so they can get some sponsorship money into the game.’’

Smart and Weatherald identified the two Borneonians as most likely to succeed at a higher level.

“Timbal was vice-captain of Indonesia at last year’s International Cup in Melbourne and has plenty of ability and enthusiasm for the game,’’ Smart said.

“Noor can play across half forward or half back with his pace and physical approach. I reckon he broke his collarbone or at least hurt his shoulder in the first quarter before being patched up and coming back on to win the best on ground medal.’’

Waratahs want to get both players into Darwin to do a fortnight of pre-season work, including weights and sprint training, once funding and visas are sorted out.

“We’ll get them back again for some trial games and later on for full-on premiership matches, all two-week stints,’’ Smart said.

“And the best part is the coach of the Borneo Bears, Shane Kruger, is moving to Darwin with his work, so he’ll be here to help them out.’’