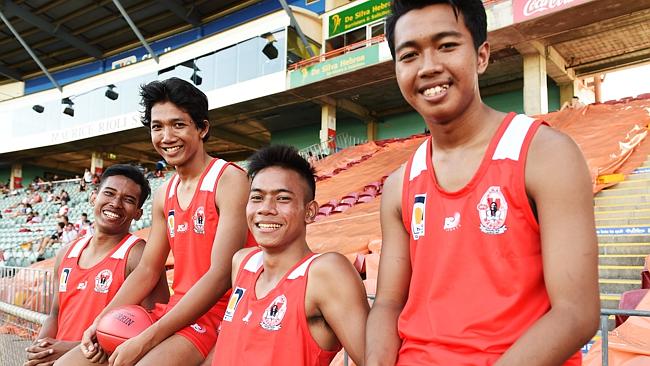 WARATAH might be struggling in Premier League, but their playing depth in the NTFL lower grades is creating a lot of interest inside and outside the club.

The Gardens Oval club showed off the products of its recruiting trip to Balikpapan in Indonesia on Anzac Day this year when it debuted four Borneo footballers in Division 1 and 2 last weekend.

“A lot of people said we were only on a junket,’’ Smart said.

“This trip has all come together through sponsors like the Commonwealth Bank in Borneo, Coates Hire and Pedders – there was no help from the AFL whatsoever despite us applying for a grant.

“These boys are in Darwin on visas for four weeks to play after I combined with AFL greats Gary Buckenara and Doug Hawkins to pick the best players in the annual Borneo Bears v Jakarta Bintangs clash in Balikpapan.’’

Australian football is a new sport in Borneo. The four players in Darwin have only played the game since its introduction to the island in 2012.

Borneo coach and true blue Aussie Shane Kruger changed the policy of expat Aussies chasing a kick and a catch to encouraging locals to play the game on a fulltime basis.

“Now we’ve changed it completely to the stage where we’ve got about 50 young Indonesian men playing Australian football in a 12-a-side, four team competition on a soccer ground,’’ he said.

“These four players have already represented Indonesia – against the IC 14s in Melbourne last year – when three of them were dominant players on the day.

“I’ve been coaching them pretty hard for three and four nights a week in between running the Auskick program over there for 40 or 50 kids.

“Unfortunately I’ve transferred back to Darwin and there is no-one over there to take over my role. Hopefully they will find someone soon.’’

Kruger said the introduction of Australian rules football to Borneo in direct competition to the country’s traditional sport of soccer had been a bold, but ultimately successful exercise.

“Plus it’s been important in another way, beyond just playing sport,’’ he said.

“Balikpapan is actually very significant to Australians and not a lot of us know that. It was the scene of the second-biggest land-sea assault in wartime outside of Gallipoli.

“Basically Australia went in and got rid of the invading Japanese out of there, which means we’ve got very strong ties with Balikpapan.

“From that there are Australians who work there permanently. All we wanted to do in this case was give something back to the people and I believe we’ve done that through football.’’