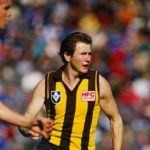 Buckenara first played senior football for Subiaco in the WAFL from 1979 to 1981. Subiaco agreed to lease him for three years for $210,000 and after a court case began his career at Hawthorn. His kicking was highly regarded by his teammates and his reputation in football was assured when he kicked a goal after the siren in the 1987 Preliminary Final to defeat Melbourne. 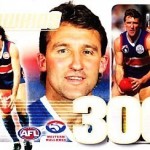 DOUG Hawkins has been bestowed Legend status in the Western Bulldogs’ Hall of Fame at the club’s 2014 season launch on Wednesday night.
Hawkins, 53, played 329 games for Footscray/Western Bulldogs between 1978 to 1994, captained the club from 1990-93 and was inducted into the AFL Hall of Fame in 2004.