The Garudas squad brought together the best Indonesian national AFL players from Balikpapan, Bali, and Jakarta, who’d been training hard for months in the lead up the tournament. 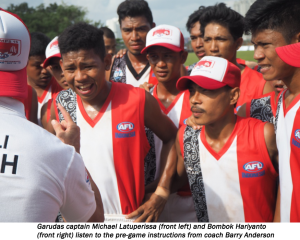 The Indonesia Garudas defeated Team IndoChina in the preliminary match on their way to the final. Coached by former AFL star Andrew Embley, and featuring players from Vietnam, Cambodia, Laos, Thailand and Myanmar, Indochina couldn’t match the skills, fitness, and ferocious tackling of the Garudas.
Led strongly by vice captain Timbul Santoso (Balikpapan) and ruckman Markus Ria (Bali), the Garudas were fired up from the first bounce and immediately went to work, getting the jump on Indochina in the hot and dry conditions. Some wayward goal-kicking limited the damage in the second half, however the Garudas dominated for much of the match and had a well deserved win.
Final Score: Indonesia Garudas (8.19.67) def Indochina (2.0.12). 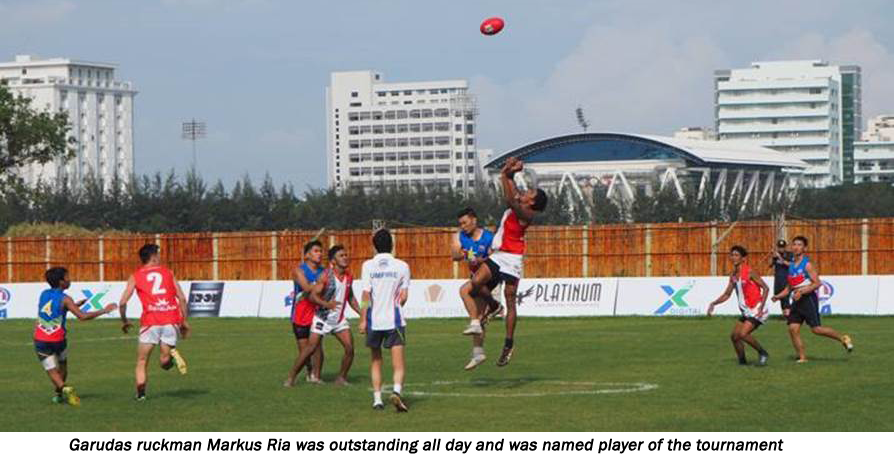 The tournament final saw the Garudas come up against the China Reds. Although the China Reds were clearly taller and bigger, the Garudas weren’t intimidated and took it up to their larger opponents from the outset of the match.
Vincent Hallim and Yossi Taihuttu (Jakarta) continually broke through tackles, delivering the ball forward with precision and leaving the China Reds scratching their heads for answers. Eventually the superior fitness of the Garudas saw them overpower the team from China in the second half, to run out two goal winners and enjoy their first taste of AFL silverware.
Final Score: Indonesia Garudas (3.4.22) def China Reds (1.4.10)

Garudas ruckman Markus Ria was outstanding all day, and was named player of the tournament. 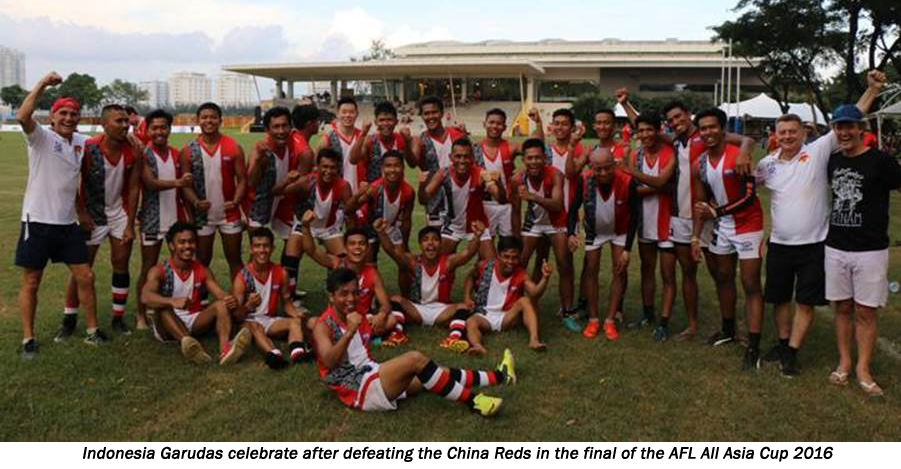 Garudas coaches Boy Pasaribu and Barry Anderson commented that while they’re immensely proud of the team and the efforts of the players, their eyes are now firmly focused on continuing to build the successful AFL development program within Indonesia.

For the Garudas players, their attention now shifts to the AFL International Cup to be held in Melbourne in August 2017. Stay tuned…