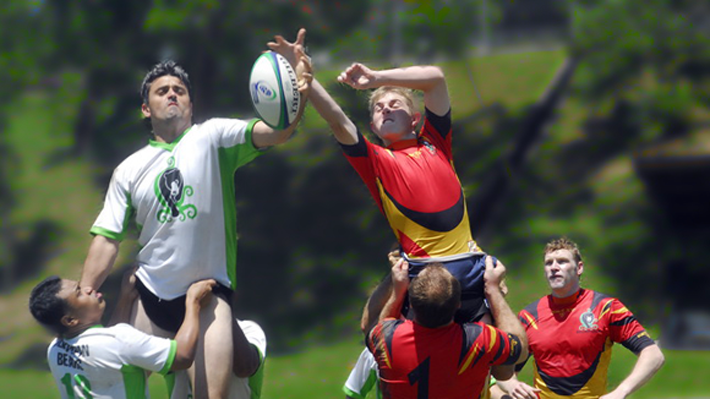 On 1 July 1945, The Australian 7th Division, composed of the 18th, 21st and 25th Infantry Brigades, with support troops, made an amphibious landing, codenamed Operation Oboe Two, a few miles north of Balikpapan, on the island of Borneo. The landing had been preceded by heavy bombing and shelling by Australian air and naval forces. The Japanese were outnumbered and out gunned, but like the other battles of the Pacific War, many of them fought to the death. 230 Aussies paid the ultimate sacrifice.

Taking the name Operation Yoboe, the Jakarta Bintangs, with their junior side the Jakarta Bulldogs in tow, journeyed to Balikpapan in Kalimantan to contest the Borneo Bears for the Borneo Cup on Anzac Day, April 25th, 2009.

As always, the day commenced with the solemnity of the Dawn Service, but the afternoon’s football was fast and furious and not without surprise.

The Bears had come to play and applied plenty of physical pressure to the Bintangs in the first half. But the Bintangs have been around for a long time and their experience and superior FITNESS told in the second half for them to run out comfortable winners, 4.10 (34) to 2.4. (16)

In an eerie coincidence, in Perth on Anzac Day the Australian under 17 side “touched up” the senior WAFL side Perth Thunder. There was, however, no supernatural reason for the result of the Jakarta Bulldogs (essentially the Indonesian Under 17 side) versus their mentors and masters, the Jakarta Bintangs, just inspired, quality football from the Bulldogs in every part of the field.

They carved up the small ground with precise long kicking to position. They kicked a bagful from set shots, opportunities grabbed in melees and on the run. They out-rucked, out –ran and out-contested their bigger and more mature opponents. 5.3 to 0.3 for the first half was an accurate reflection of the play of the Bulldogs.

The shell-shocked Bintangs regrouped in the second half and put flashes of their best on display but it was never to be enough. A telling and enduring image of the game was the sensational goal put through by Alf Eddy in the last half 30 metres out with two opponents right on his case.

Reality returned when the Bintangs, stung and embarrassed in the earlier encounter returned with a vengeance to exact appropriate revenge on their prodigies, the Bulldogs.

In a hard-fought encounter the Bulldogs continued being truly worthy opponents and putting on major skills exhibitions time and again but the Bintangs were hungrier for victory and had sorted out their game plan, by using their harder bodies, slowing the game down, and being more precise in attack.

Whilst the trophy may have been won by the Bintangs, it will be the performance of the Bulldogs that will be remembered. Most of the Bulldogs come from the British International School in Jakarta and represent many nationalities including British, Irish, Indonesian, Finnish, Scottish, Korean as well the ubiquitous Aussies and Kiwis. Last year, they triumphed in the Under16 competition at the Asian Championships and if this performance is any arbiter, they will be very difficult to toss this year.