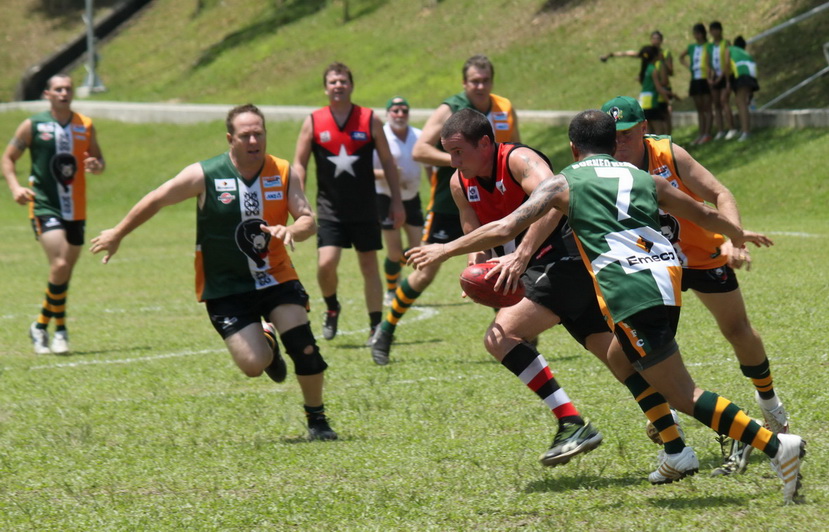 In February a group of boys begun an Australian Rules football odyssey – they started training at the Batakan “G” Gazebo. The boys began learning the greatest game on earth through training for arguably the greatest Australian football team in Asia. Some of the boys had a passion about Aussie football, some knew it only as aerial pingpong, and some thought it was a strange offtake of rugby union. There were also some whose boss (whom they were driving for) insisted they train and learn the game.

But through all our differences, we shared one thing in common – the love of post training beers. And over many a post training beer the players learned of Borneo Bears triumphs and tribulations of years gone by. Soon the boys collectively grew to understand what it meant to put on the green white and yellow Borneo Bears jumper. It was about respect for the jumper, love of the game, and due to the typical condition of the TOTAL ground – it was about getting dirty.

On Saturday the 23rd April, those boys became men. All the hard work was for that one day in April. For the Borneo Bears it wasn’t about the scoreboard – thankfully it never is. It was about each contest. It was about attacking the ball and either winning the ball or making the opposition player earn his kick. Given the importance of the occasion, a strict no sex policy was adopted for the week LEADING up to the tournament but sadly for most of us this was no change from any other week.

The first game saw us come up against a seasoned, tightly-knit Bali team – a group of players that have played together tournament after tournament for a number of years. Their cohesion shone through and made it difficult for the Borneo Bears who were still getting used to playing together as a team. And it must be said that around half the Bears team were playing either their first game of Aussie Rules Football, or close to it. The highlights for the Borneo Bears was how quickly we begun working together as a team, and how quickly the rugby guys adapted to our far superior footy code. Though there were individual flashes of brilliance, importantly by the end of the Bali game the Bears were starting to play together as a team which bode us in good stead for the Jakarta game that followed. The final score didn’t reflect the contest. Borneo Bears – 3.5 = 23 vs Bali Gecko’s – 17.4 = 106.

With a game as a team under our belt the Mighty Borneo Bears were primed for the Jakarta Bintangs. Jakarta were supremely confident of not only beating the Bears easily but also retaining the ANZAC trophy later that day. The Bears came to play and it was a hard fought contest. Every possession out on the field was earned. The Borneo Bears spirit was on display and even AFL premiership players Gary Buckenara and Ken Judge were on the edge of their seats. The hard, tough, unrelenting football on display by the Bears drew some Binatangs casualties who were rushed off to the hospital. At the hospital the casualties were clinically diagnosed as being busted open by the big bad bustling buffalo borneo bears. The doctors and nurses had seen it all before in previous ANZAC clashes. The Bears played well all over the ground – the midfield got first hands on the footy, the forwards were kicking goals, and the backline held firm. The Bears walked off the ground proud of their achievements. The final score was flattering to the overrated Bintangs – Borneo Bears – 6.6 = 42 vs Jakarta Bintangs – 14.3 = 87.

A big congratulations to all Bears players that donned the Bears Guernsey on the day. Well done to Bali who took away the trophy. And very well done to the committee, associates, and volunteers who organised such a great weekend!