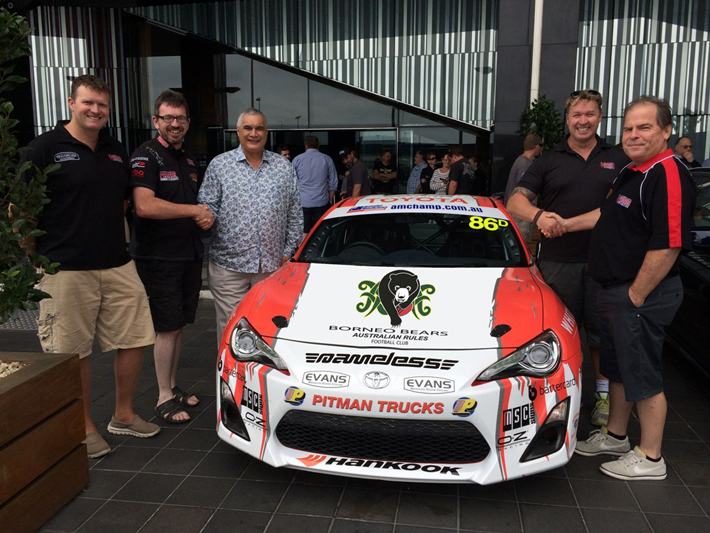 As the Australian Manufacturers Championship season approaches, Victorian based team, Pedders Racing, have been busy trecking their 2013 class champion Pedders 86 across the state to showcase the car, sponsors and series to motoring and aerospace enthusiasts, receiving a grand response to their latest sponsor partners, welcoming AFL Asia affiliated, Indonesian based Australian Rules Football Club, the Borneo Bears.

Having begun racing in club level with an Auscar Holden VL Commodore and V8 Nissan Bluebird, moving into state series with their dual-class champion Proton Satria, before taking on the challenge of building, entering and succeeding with the world’s first 86 GTS in a national production racing series, Pedders Racing have had many loyal sponsor partnerships including the likes of Pedders Suspension, Valvoline, Bosch Automotive, Whiteline and Pitman Trucks. The regional volunteer team are again showing their strength as further internationals join the crew, with the Borneo Bears bouncing into action as they showcase their AFL Asia team and Bears AFL AusKick junior development program across Australia and Asia through the Pedders connection.

For the Borneo Bears, the story started at a mining, oil and gas function in 2008, as Australian expats discussed the formation of an Australian rules club outside of the island nation’s borders. It wasn’t long until the buzz spread across the region with talk of bringing the great game to Balikpapan, to join the likes of Bali, Jakarta, Thailand, China, Camodia, Vietnam, Singapore and Dubai in the AFL Asia competition. It’s a similar story to that of the growth of Pedders Racing, likeminded enthusiasts coming together to realise an opportunity for growth and experience, as explained by Borneo Bears’ President Tom Comerford,

“Knowing the passion that Australians have for sport, and having built successful supporting businesses in Indonesia, it was a smart move for our group to bring a sport as popular as AFL to our shores, just like it’s a smart move to join with a passionate and professional motor sport team to introduce our Borneo Bears team and Bears AFL AusKick juniors to the wider world, and hopefully to open the door to bringing our Bears members to Australia, back to the heart of the game and the racing they love.”

Pedders Racing Team Principal, Grant Phillips, is more than proud to add yet another international organisation to the #86 team, saying,

“We’ve been blown away by the enthusiasm of the Borneo Bears as they get ready to race with us this season, and what is there that’s better than going racing, supported by passionate organisations, for the benefit of the next generation.”

Having already attended off season promotional events including the Australian International Airshow, Big Boys Toys Show for Muscular Dystrophy Australia, and the Australian Formula One Grand Prix, the team now heads on to the Australian Motoring Festival to reunite with their star co-driver, Shane Jacobson, before the first race events of the season, the Sandown 3 Hour Classic and another attempt at Mount Panorama’s Bathurst Motor Festival, the place where the world-first class champion 86 made its wheel-turning debut back in 2013.